If you're really into snowmobiling in New Hampshire, then the Lake Winnipesaukee region has a lot to offer.  It is becoming an ever-increasingly popular winter sport.

There are so many miles of snowmobile trails in the Lake Winnipesaukee area that will keep you busy all winter.

If you have your own sled, bring it on up.  If you don't there are places you can rent.

It's a great idea to join a New Hampshire Snowmobile Club.  That way you have access to all the trails.

They also promote safe and responsible riding.  Plus, if you join the club you get a discount on your registration. 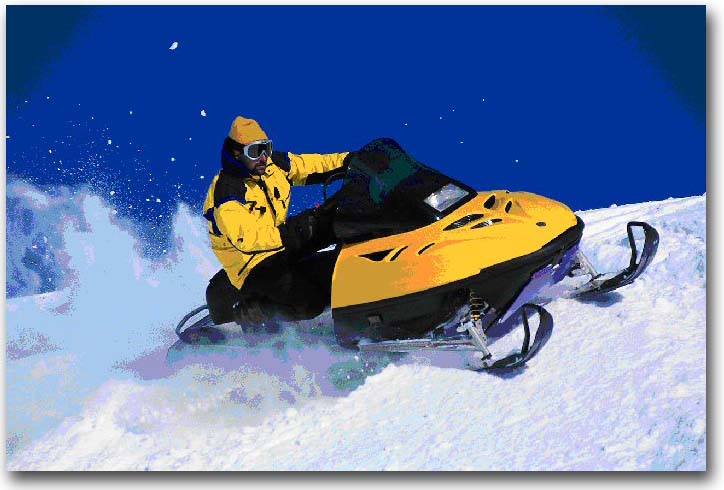 There are all kinds of trails.  Some go over fields, through woods, up hills and over bridges.  I've gone on the trails near my home but my husband has gone all over.

He's met up with friends and did some riding on Lake Winnipesaukee.  There are many places to stop to eat or get gas if needed.

Snowmobiling in New Hampshire is a fun way to spend the day.  It's usually a long trip when you go.  If you have space, bring some water and snacks in case you don't go by a place to eat.

Here are some tips:

The Lakes Region has an extensive network of trails consisting of private (club access), town and state.  Although crossing lakes and ponds make the going shorter and easier, you can get to most destinations before the waters are frozen. 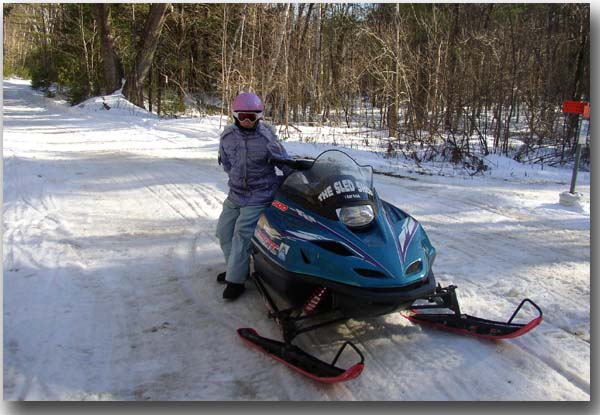 The New Hampshire state trails are part of an extensive trail network that go from the southern border all the way up to Canada.

The various clubs maintain a large portion of the trails by periodic grooming to flatten out the unavoidable bumps and bare spots produced by the ever increasing traffic of this growing sport.

Some New Hampshire towns like Belmont share the trails with ATVs while others such as Gilford banned wheeled vehicles.

In general, the trails that ban ATVs and other wheeled vehicles tend to have superior groomed trails for snowmobiling.

You can find information on the trail system by obtaining a map from the clubs.  These are found in a lot of stores and restaurants in the region as well as contacting the clubs. 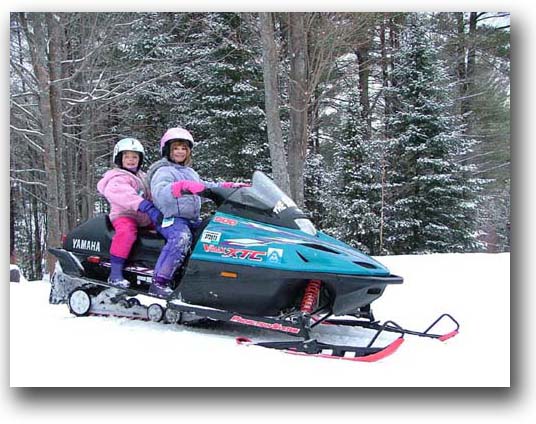 Some of the New Hampshire clubs around Lake Winnipesaukee can be contacted via the NHSA.  Some of the clubs post a map on their web site, but they usually don't print out very well.

Unfortunately, there are not intricate trail maps that cover large areas of the state, though I have found some that cover the lake and surrounding towns for a short distance off from the lake.

The other challenge with the trail maps is that each year the trails change in places where they have to be re-routed around new construction or land owners who have reneged their permission.

This makes it hard to keep maps updated when they are being produced by volunteers in the various clubs.

Once the lakes have frozen, riding the open expanses provides many opportunities to go from one town trail system to another fairly rapidly.  Running the open lake is also one of the safest places to run your sleds at high speeds.

On Lake Winnipesaukee in New Hampshire you need to use caution when running at high speed as the lake often produces ice riffs that can be several feet high or lie just under a fresh layer of snow.

If you hit these riffs at high speed you might just find yourself in flight mode.

I always find the lake interesting as each time I go on it I find a different condition of snow and ice that make for interesting conditions, running the gamut between challenging and perfection.

The frozen lake presents great opportunities to get to the restaurants, gas stations and watering holes found in the towns bordering the lake.

Be careful, though, as the state has strictly enforced laws against operating a snowmobile while intoxicated.

It's a great idea to join a New Hampshire Club.  That way you have access to all the trails.  They also promote safe and responsible riding.  Plus, if you join the club you get a discount on your registration.

The clubs work hard all year to keep and maintain trails.  First, they must negotiate with  land owners for trails that go through their property and each year must get a written letter allowing club members to use the trails.

They also work with the town where they are based to establish trails on town owned land.

The New Hampshire clubs work together through the NHSA to lobby the state in setting aside trails on state owned property.

The clubs use membership fees to purchase machinery and materials used to groom and maintain the trail system.

All of the work on the trails is done on volunteer time by club members.  The clubs sponsor many events throughout the year such as supers, group rides, races and more. 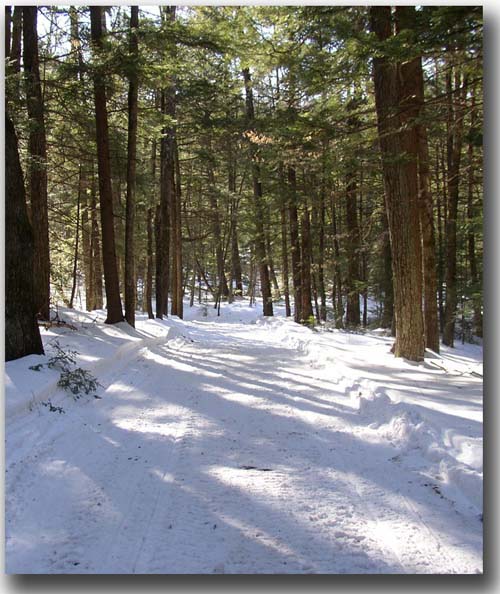 New Hampshire state law requires that every rider must obtain permission in writing from property owners in order to cross over trails on private land.

When you join a club, the club has the written permission from all of the property owners that the trails pass through and you, in turn, automatically through the club have the same permission.

All of the clubs have reciprocal permissions, so you only have to join one club.  If you are going to register your sled in New Hampshire you are required to join a club if you use any trails that go through private property.

For more information on New Hampshire clubs in the lakes region visit the NHSA.

Over the last ten years, there has been big improvements in snowmobile technology.  Such things as more powerful and dependable liquid-cooled motors, four-stroke technology and suspension that rivals either the best sports cars or luxury cars depending on the ride you're looking for.

They also have heated foot rests and hand grips.  This all adds up to a comfortable but exciting ride.

The dependability over the last ten years of the sleds is so good, that looking for a used sled makes sense to a lot of people.

The fall is the best time to find a used sled, because so many people are trying to sell their one to three year old snowmobiles so they can upgrade to a new one.

The new technologies apply to helmets and clothing as well, making your riding experience very comfortable. 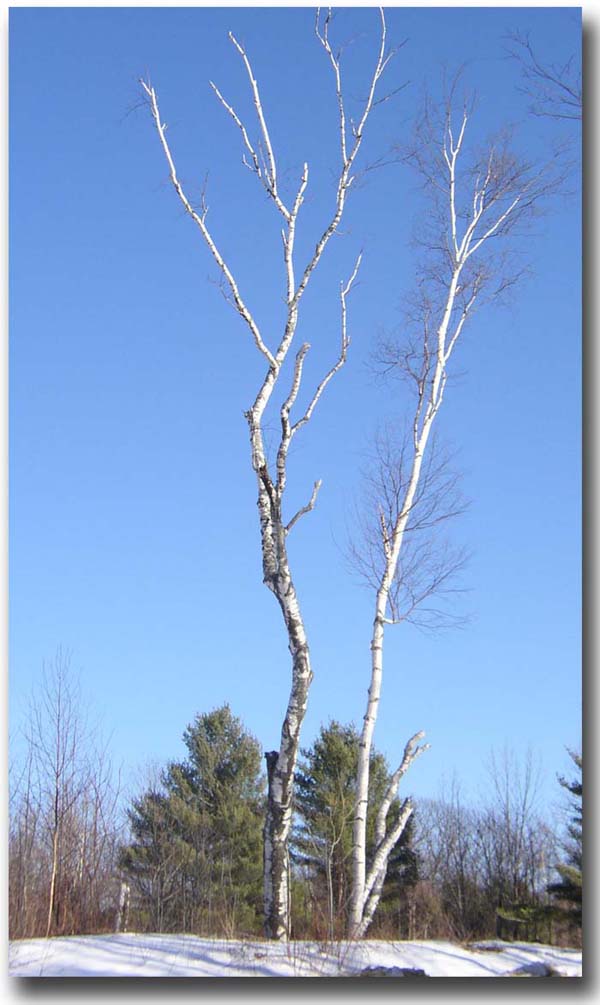 Snowmobiling in New Hampshire can be a family sport.  You can get child size sleds so everyone can ride.  My husband takes our kids out one at a time.

He does a loop around the trails in the neighborhood with one while the other plays in the snow waiting her turn.  They're looking forward to their snowmobile rides this winter.

Many people ride as a family unit and they either own or rent the sleds.  They spend the day riding the trails and lakes.

Many families visit a town that has an activity going on such as a winter carnival or stopping at one of the many restaurants along the trails.

In the summer, there are grass drags over behind the Laconia Airport in Gilford, New Hampshire. These are fun to watch.  The grass drags are club sponsored but are open to anyone.

There is also pond crossing at the same time.  This is where you take snowmobiles starting on land, getting up to speed and trying to get across the open water without sinking.

Radar Running is club sponsored and they usually take place on an open farm field.  You generally race your snowmobile over a measured distance where you (one at a time) go up the course, getting clocked by a radar fun.

You compete against each other based on size of engine for the fastest run.

After the friendly competition, they either have an outdoor cookout or go back to the clubhouse for awards and camaraderie. 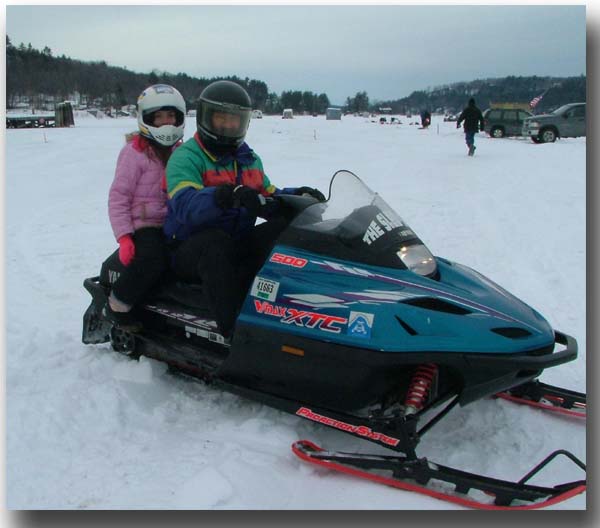 Ice radar runs take place on Lily Pond in Gilford, New Hampshire.  Some are scheduled and some are impromptu.  On any given winter weekend, drive by the pond and you can catch the various factory teams testing their sleds.

For more information, look on the club websites, town websites, Meredith Chamber, the Lakes Region Chamber or the Wolfeboro Chamber of Commerce websites.

You can also Google for ice drags or radar runs in the Lake Winnipesaukee region or lakes region of New Hampshire.